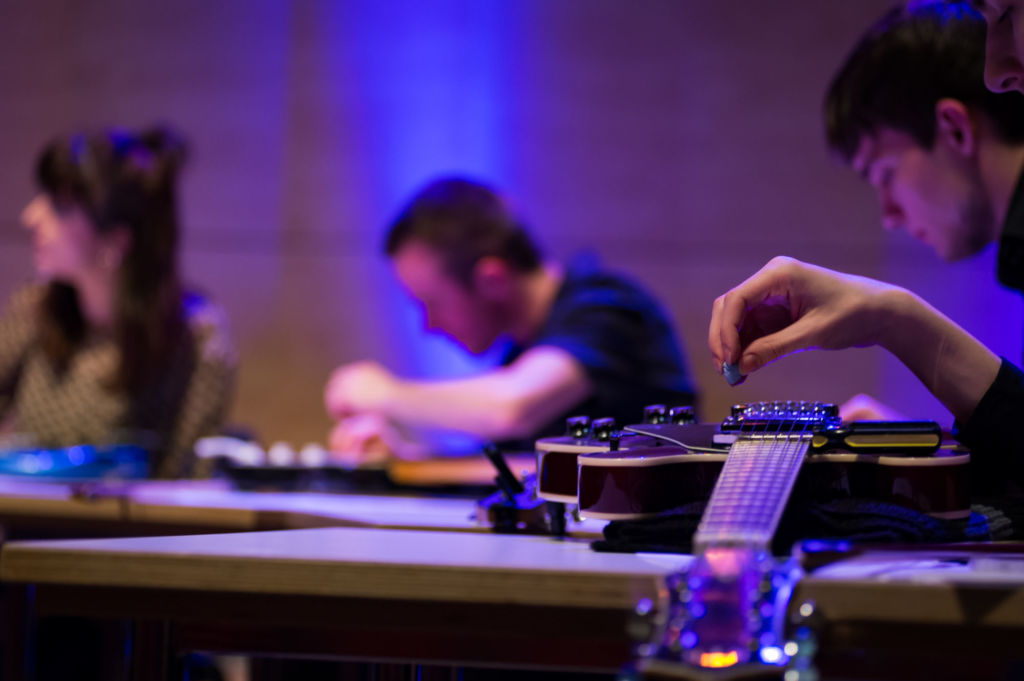 With the thrum and strum of a small army of electric guitarists, The Fringe Guitar Project makes architectural spaces reverberate with new sounds. An immersive sonic and physical environment combines elements of newly composed music, architecture and acoustics. Three composers create inter-disciplinary worlds through which the audience navigates. Especially for this project, Barbara Ellison, Marina Poleukhina and Maya Verlaak wrote brand-new works that each exist on their own terms and in-between existing genres – electronics and improvisation, conceptual and performance art, punk and classical music.

A production of Ensemble Klang in association with the Academy of Music and Performing Arts, Tilburg

“This will be a new work in my series of Instrumental phantoms works (composing sonic phantoms) for multiple prepared string instruments. The guitars will be “prepared” and amplified in a composition to create a strange and playful ritualistic repetitive trance inducing performance. I work with many techniques to achieve an intriguing hypnotic sound using instrument ‘preparation and techniques of composition such as detuning, repetition, persistence, endurance, highlighting and accentuation. This is not an installation, but will be scheduled composed  performance – setup in a space where the audience will be surrounded by the musicians.” 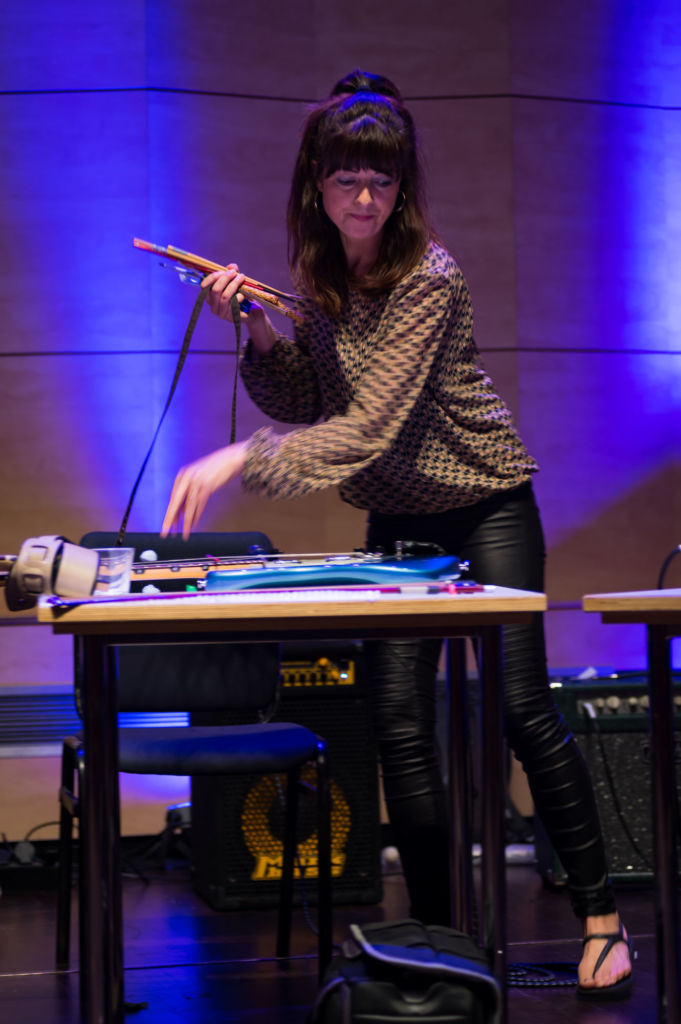 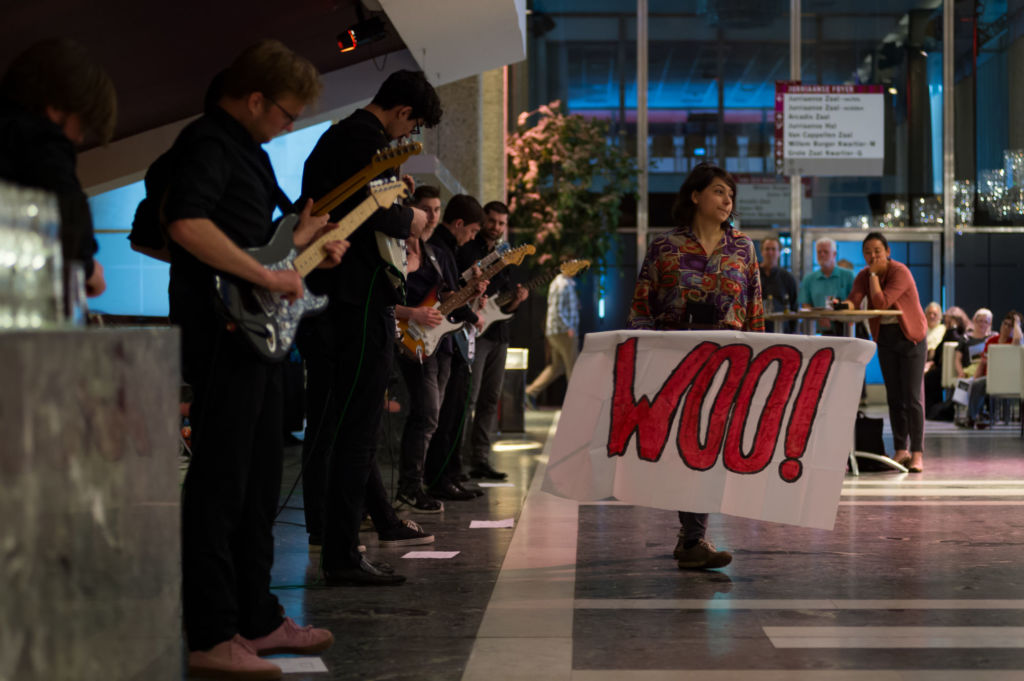 “I compose music because I enjoy the reflection processes that come about. I’m a composer who likes to work with the given context: we work in a funny world with a history of etiquettes and conventions. I like to focus on particular elements in a given context, question them and turn them upside down!  In doing so, I make the audience and performers to do the same. Occasionally, this is done by ridiculing the questioned material.

Prowess is a development of my work: “A Hard Day’s Night” for solo guitarist. This work started with an observation: A contemporary music audience rarely shouts “Woo!” out of appreciation to a performer, but it does happen at a Rock/pop concert. An audience at a Beatles concert, was so loud, you couldn’t even hear the music anymore, instead, the audience created the music with their excitement! In my “A hard Day’ Night”, I asked a solo guitarist to wait until someone would shout: “Woo”. A self-build computer programme would analyse the pitches in the shout and relate the analysed sound to a most closely related Beatles chord.”

“Music for me is more than just a sound. It is a permanent breathing and constant action, that consists the emptiness of the space with the fullness of lonely objects, that move around or passively stand. The attention here is like a frame that can include the things as a sound, sandpaper, light or gesture… All of it is part of the musical language – when I improvise on the guitar using a thread of capron, the thread might break. But this instability of the sound creates a particular system of relationships between me, the thread, the string, the space and the people around. I never know why I’m playing or writing the music. It just appears in this way – this very intriguing way, that brings me always somewhere, where I have not yet been.

tiny little area dedicated to the piece
A fragile shape of relationships appears between the object and the guitar, between the guitar and the performer, between the performer and the space. Here, the instrument is a combination of tiny details. It expresses itself in different situations of interaction, which at the same time integrate and disintegrate.” 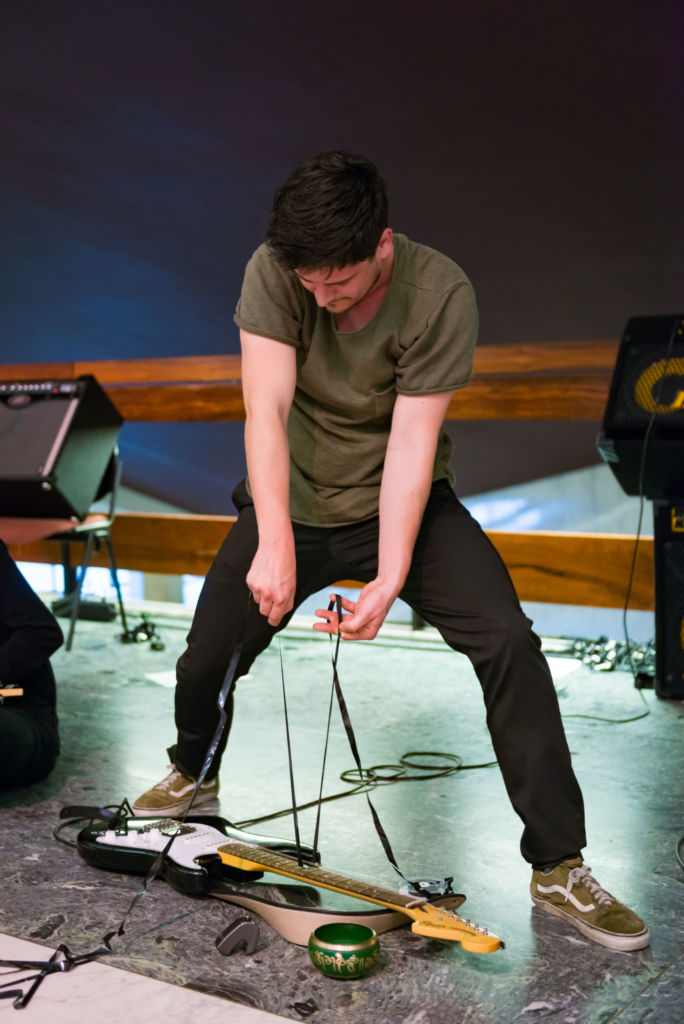 Geneviève Murphy – Something in this Universe