On 29 June the festival day will be opened at 3 pm by the students of the Ensemble Academy of the Royal Conservatory. They literally take over the Zuiderstrandtheater and play in all kinds of areas of the building. Students Alfian and Francesco talk about their collaboration for this day.

“He plays on a beautiful Italian cello from 1870. The cello has a very rich sound which is perfect for contemporary music, he says. Despite focusing on classical music, Alfian loves to play contemporary music and explore new things. He was immediately interested, when Francesco approached him with his collaboration idea. Francesco came from Perugia to The Hague for an Erasmus exchange. He liked it so much, that he permanently transferred and is now finishing his Bachelor here. Francesco wrote a piece called ibid. referring to the Latin word ibidem which means at the same spot or together. The title refers to how his piece works. He programmed his computer to react on the sound of the cello and so, a very intriguing dialogue begins. Francesco is fascinated by minimal music and the simplicity of it. That is something he wants to express in his art. ”

The Ensemble Academy’s program is combined with the world premiere of composer Maxim Shalygin. Tickets can be purchased at the Zuiderstrandtheater. 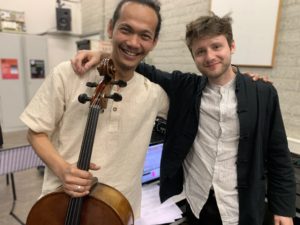