From September 2022, Guzmán Calzada Llorente will be composer-in-residence at Festival Dag in de Branding for two years. Guzmán is a composer, guitarist and sound designer of Uruguayan-Spanish descent. He did the Master in Sonology at the Royal Conservatory in The Hague. During his residency with Dag in de Branding, he will create new music based on reworkings of early music from the Middle Ages and Renaissance, for various instrumentations, including choir and electronics. His first work will be presented at the festival on June 17, 2023 in The Hague.

Guzmán Calzada Llorente: “The experience that Dag in de Branding offers young composers is invaluable. It gives me the opportunity and full support to develop ideas that have been on my mind for years. This two-year residency gives me the sufficient amount of time to work on my learning goals by means of a series of performances with different ensembles.”

About Guzmán Calzada Llorente
Versatile musician Guzmán Calzada Llorente (27) is a composer, guitarist and sound designer of Uruguayan-Spanish descent. After obtaining his bachelor’s degree in music composition at Uruguay’s University of the Republic, he chose to follow this up with a master’s programme in Sonology at the Royal Conservatoire in The Hague. Since then, he has been attached to both institutes as assistant professor and associate researcher, respectively.

As a sound artist and composer, Guzmán has intensively studied the relationship between sound and space. The resulting pieces have been presented at numerous concerts and festivals in Europe and South America. Guzmán also has a keen interest in early music and uses this as an inspiration for his compositions.
Moreover, he has also been involved in many projects of South and Central American folk music as a composer, guitarist, arranger and producer. In the Netherlands, he plays guitar in Amaltea, an acoustic folk band that mixes the intimacy of a string trio with Latin, folk and pop music. 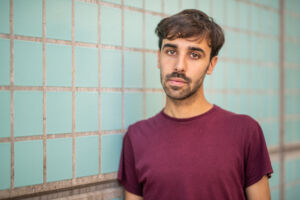 Guzmán at Festival Dag in de Branding
As composer-in-residence, Guzmán wants to focus on contemporary ways of incorporating early music into his compositions. In the repertoire from the Middle Ages and Renaissance, he will be looking for pieces that offer starting points for creative adaptation. He is interested in the timbre qualities and fragility of historical instruments and wants to work with a combination of historical and self-made electronic instruments. He will also let himself be inspired by contemporary reworkings of early music such as that of Thomas Tallis’ forty-part motet Spem in Alium by Canadian sound artist Janet Cardiff and A Late Anthology of Early Music by Jennifer Walshe, among others.

Guzmán wants to delve into the question of how historical musical practice relates to the present: after all, how we imagine the past is largely determined by what we know in the here and now.