An abandoned Istanbul is the setting for Mr. Z., a short film by artist-in-residence Meriç Artaç. For this project, she sought out abandoned places in her hometown. We follow the main character through these abandoned factories, offices and streets. We asked Meriç how she is doing and what the impact of Corona is on her work.

What is the impact of the Corona crisis on you?
The virus is a serious, scary thing and it damaged so many people in many different ways. So the big impact, of course, is the worry and uncertainty of our life in all different ways. Another big impact is social connections.
In the beginning it was very difficult to get used to not having the same lifestyle. I think we are all used to live in a certain way and what we have been going through is a complete contrast of what we are used to. At the same time as everyone else I had a chance to slow down and spend more time with myself. The sense of time has enormously changed for me, I am experiencing time in a more horizontal and spacious way, and in a way days/times don’t make sense as it used to be. I think in this period I spend some of my time observing and getting out of the system since the system stopped working for a while. And I had a chance to see the world’s rhythm from the window at my house and realize life actually one way or another continues with or without man-made systems.

How is the situation in Istanbul compared to The Hague?
During the week, people who have to go to their work psychically go to their work, at the weekends we have lockdowns. Right now things are going back to normal gradually although we didn’t find the cure for the virus. I guess knowing what the virus is and knowing what you are fighting with makes it easier to go back.

Does it in any way inspire you in your work?
This situation made me realize how fragile and connected we are in beautiful sense and helped me to see the importance of our relationships with everything that surrounds us and also with our work. I think we all had a chance to step back and see all the rush and running in our daily life. I am of course talking only from my own perspective. I am sure what I have experienced and the slowing down will influence my work too. It already helped me to create deeper connection with my work.

The viewing of your short film was planned in a theatre with a live audience. How does this change for you with the online edition?
I think the online version has more potential in connecting everyone from everywhere in the world. It makes it a nice international platform. Of course, when you are together with the audience in a theatre, experiencing a premiere together, it is a whole different feeling.

I like to see things from the positive side and I know we will soon sit together in a theatre with all the people again and these times will pass. Therefore I see the online edition as an experience and a chance to experiment!

You have been filming already. What can we expect of your film? Did the plans change due to Corona? 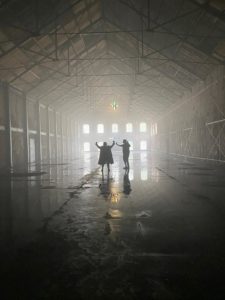 We initially had a different plan; we were planning to shoot in an abandoned hotel in another city in Turkey and because of the lockdown we were not allowed to travel to another city. That was the only plan we had to change. We then found so many abandoned places all around Istanbul.

The film has one character, Mr. Z, doing his routine, going from one place to another, collecting the sound of the characters that I have been developing in my Dag in de Branding residency. He acts, moves like the characters to trick them, and captures them into his jacket.

We also selected the abandoned places for these characters on the bases of their dominant mood and appearance, for instance like Gece; she is the melancholic blind girl, giving a dinner and telling her stories to her guests on the bases of smells (we will see her in the December 2020 edition of Festival Dag in de Branding). We selected a completely burned house for her. When we were in this space we immediately had this association of smell, melancholia, and burned stories. So we thought it would be a great space for Mr. Z hearing her sound and trying to find her in this space. He is a character hunter so he does his routine of collecting and bringing them into his place. The audience will see these associations for each character and see more of Mr. Z in the opera as the final project of the residency at Dag in de Branding (October 2021).

Read more about the film here.